Two Henderson developers have teamed up to build a business complex in the southwest valley.

American Nevada Co. and First Federal Realty DeSimone broke ground on a 50,000-square-foot office and medical project at the southeast corner of Fort Apache Road and Martin Avenue. Site work is underway on the $13 million project.

The 5-acre plot is slated to feature six buildings ranging from 4,100 to 14,300 square feet. The project, Fort Apache Professional Park, is scheduled to be completed by the end of 2021, a news release said. 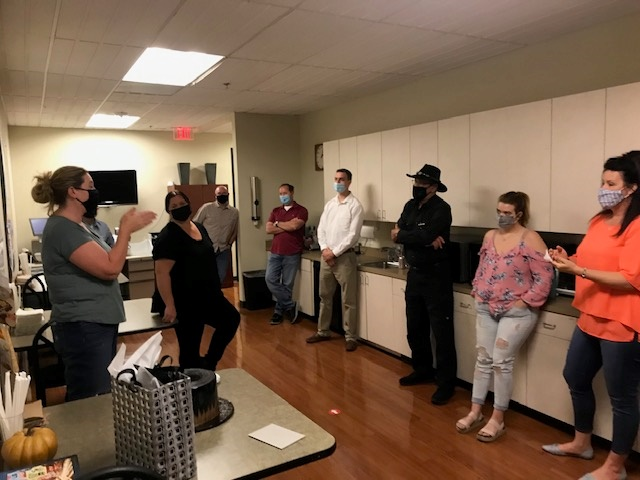 We are celebrating the 25th work anniversary of our maintenance manager, David LeDe, dressed in black in the center of the photo. We appreciate you!

Construction is on schedule for the Fort Apache Professional Park, at the corner of South Fort Apache Road and West Martin Avenue.

We are celebrating the 25th work anniversary of our maintenance manager, David LeDe, dressed in black in the center of the photo. We appreciate you!

Please enter your username or email address. You will receive a link to create a new password via email.

A two-story property located within the Green Valley Corporate Center at Green Valley Parkway and the I-215 beltway. At just under 64,000 square feet, it is occupied by a single-use call center.

Aliante Corporate Center is located at Aliante Parkway and the I-215 beltway, and within the master planned community of Aliante. The property consists of two, 2-story office buildings each totaling 27,000+ square feet of office space.

Three multi-story office buildings located adjacent to the I-215 Beltway and St Rose Parkway. The project consists of 161,000+ square feet, and features a shared courtyard between the buildings. The buildings offer views of the Las Vegas Strip, and is part of a 160-acre development, which includes the upscale Green Valley Ranch Resort, The District, and Lifetime Fitness.

Two single story Class B office buildings located in the Corporate Center South office park located off the I-215 beltway and St. Rose Parkway. The project affords access to nearby amenities such as The District, Lifetime Fitness, Green Valley Ranch Resort, as well as other retail, office and medical facilities.

A Class A, three-story, 66,000 square foot building located within the Green Valley Corporate Center at Green Valley Parkway and the I-215 beltway. The property offers quality design, finishes and construction, coupled with generous building setbacks and abundant landscaping to provide an impressive corporate environment.

Located in the Aliante Master Planned Community, this is a Smith’s Food & Drug anchored shopping center is located off the I-215 beltway and Aliante Parkway. Tenancy in the shopping center includes Great Clips, The UPS Store, Subway’s, among other national and local shops.

Constructed in 2001, and located within the Green Valley Corporate Center, this two building, single story project offers quality design, finishes and construction. This location provides immediate access to the I-215 beltway, and convenience to nearby amenities such as The District, Green Valley Ranch Resort, as well as other retail, office and child care.

Part of a two building project, this two story Class B property is a occupied by a single tenant. The building shares a small courtyard area with the adjacent building. The project has generous setbacks and abundant landscaping, providing an inviting work environment.

Executive and senior manager with over thirty years of technical and administrative experience within the large-scale real estate development, general construction and real property asset management industries, including profit and loss responsibility for successful development and construction of an $850 million, highly diversified portfolio of commercial & residential mixed-use, retail, industrial, institutional, manufacturing, multifamily housing and heavy/civil projects throughout the southeastern and southwestern United States.